In October I ran the Big Fun Run. This was my first Fun Run as a Vegan. I have run 5K’s, 10K’s and a two Half Marathon’s before. This was before I became injured.

Three and half years ago I ran the Inverness Half Marathon, between the six and seven mile mark I felt something go in my right knee, as I carried on it got more painful and I started walking. I found walking more painful than running, so I kept running.

After a Doctor’s examination it was confirmed that I had slight ligament damage and I had split the cartilage in my right knee. Walking was painful and I was putting excess pressure on my left knee which also went. Six months later and walking was still a painful experience. I couldn’t walk as fast as before. At one point I thought I couldn’t run again.

After a brief check up with the Doctor I got the clearance to go running again. I went to the gym to weight train to re-build the strength in my legs. I then started running and building it up again. When I felt ready I entered the Big Fun Run.

I completed the Big Run in over 37 minutes. I didn’t time it, I just wanted to enjoy it. It was an extremely emotional moment crossing that finish line. Onwards and upwards I have now entered myself into the Edinburgh Marathon 10km in May 2016. I am so excited! 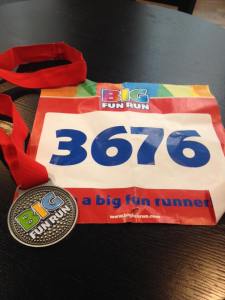 View all posts by thenovicevegan