When I first started to take an interest in Veganism last year, I was following a vegetarian diet. At one point I asked myself “why do I not eat meat?” “What is being Vegetarian all about?” I felt completely disconnected with my beliefs. I also felt for the first time the urge to eat meat. I was worried that I would go on a meat eating binge. After doing some research I had discovered some documentaries online that I could watch.

I discovered Earthlings, a documentary about Speciesism narrated by Joaquin Phoenix. It was an eye opening experience for me and I was appalled by the cruelly carried out by the meat and dairy industry. Ironically I had a cup of coffee in my hand with milk in it and I remember feeling ill after drinking it. I could not imagine the amount of suffering had gone into making the milk for my coffee. I feel ashamed. I have seen other documentaries since my Earthlings Experience.

I found out a month ago there is a group called the Earthlings Experience Scotland. They gather at public places and play clips from Earthlings. They are very distinctive with their white masks, they stand firm with their signs and laptops. They give people the opportunity to make the connection between the cruelty and what is on their plate or in their coffee. I find them very inspiring and extremely brave.

I was intrigued to know how they started in the first place. These events have been appearing in lots of different cities.

Kirsty and Jamie are the organisers of the Earthlings Experience Scotland. After listening to a podcast about the events in the UK, they wanted to get something similar started in Scotland. Thankfully they know people who are Vegan Activists and the group was formed. All of the members have make their own signs, brought their own masks, bring their own laptops and pay for their own leaflets.

Their main aim is to spread the vegan message and promote veganism as much as possible. The leaflets and video clips are to make people think about what is on their plate and make the connection. They would like to see events all over Scotland.

They are doing really well, there have been several events in Edinburgh and Glasgow so far since the beginning of the year, with more planned in both cities. New events will be appearing in Aberdeen and Dundee and many more cities.

I met up with the group, as we were waiting for people to arrive, it had started to rain. The location was then decided to outside the office next to Superdrug as there is cover. As the group set up their laptops and put their masks on I noticed that the public had also noticed them there. Once the group was set up I stood back and watched. The reactions were quite interesting. Some people put their heads down and walked past, some people looked but didn’t approach the group. Sometimes it took a bit of encouragement from a member of the group to get a member of the public to take a leaflet. The city centre was quite busy and a lot of people walked past.

A few people stopped and watched the clips that were on the laptops or stopped to take a leaflet. I noticed a few people taking photos of the group from time to time. Some people that had already walked past came back to find out more. Once a leaflet was taken the leaflet was being read as that person walked on. It was good to see people putting the leaflet in their pockets.

Whilst I was observing the publics reactions, a gentleman approached me quite aggressively and said the group were frightening people. I was taken quite aback from it. He stated that he supported the cause but this was frightening people into it rather than encouraging them. At this point a member of the group joined me and said that was not the point of the group. He walked away, and no he is not vegan (it’s too restrictive apparently!). She dealt with that situation very well. 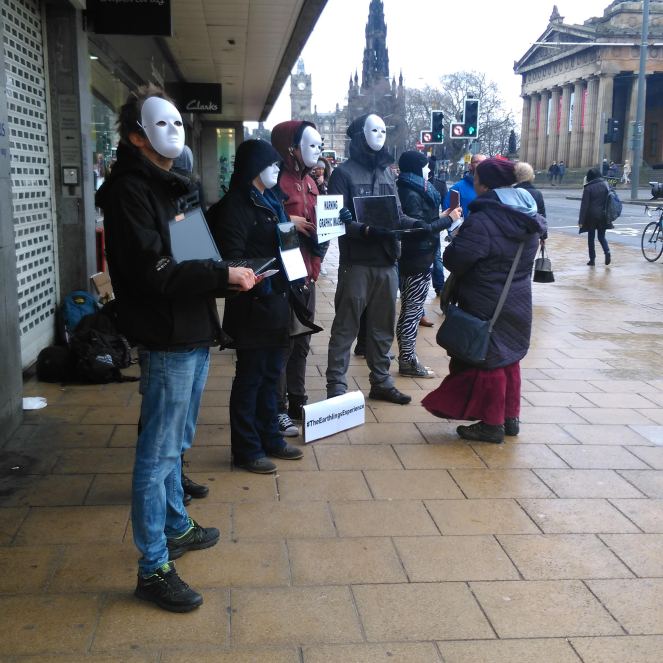 Once reaction that clearly stays in my mind is a lady who had watched the clips for quite a while. Her reaction was very similar to mine, disbelief, shock and sadness. She looked genuinely upset by what she had seen and I thought she was going to start crying. It was quite an experience for her. I completely related to this lady and I hope she made the connection.

They also had a visit from the Police, thankfully there had been no compliants they just wanted a contact number and possibly to say hi.

There was also a fundraiser where the full version of Earthlings is being played in a venue. People are invited to come in and watch it. Once the documentary has been shown, the viewers are paid £5 and given vegan food. The fundraiser was extremely successful will all four locations were funded.

I am completely inspired by the actions of these people. If Earthlings could turn me Vegan then it could help in spreading the message and the reasons behind the vegan lifestyle. This is a peaceful protest and they do not to cause any trouble just to show people the Documentary and hopefully inspire them to take action. Vegan activism takes many forms and this is an amazing way to get the message across.

View all posts by thenovicevegan

6 thoughts on “The Earthlings Experience Scotland”